My buddy and I got ourselves each a copy of 7 Days to Die in the previous Steam Sale. And we are not sorry that we did! We took a bit of a chance on it, seeing it's still in Alpha and was released on Early Access, but damn, it's very good so far! 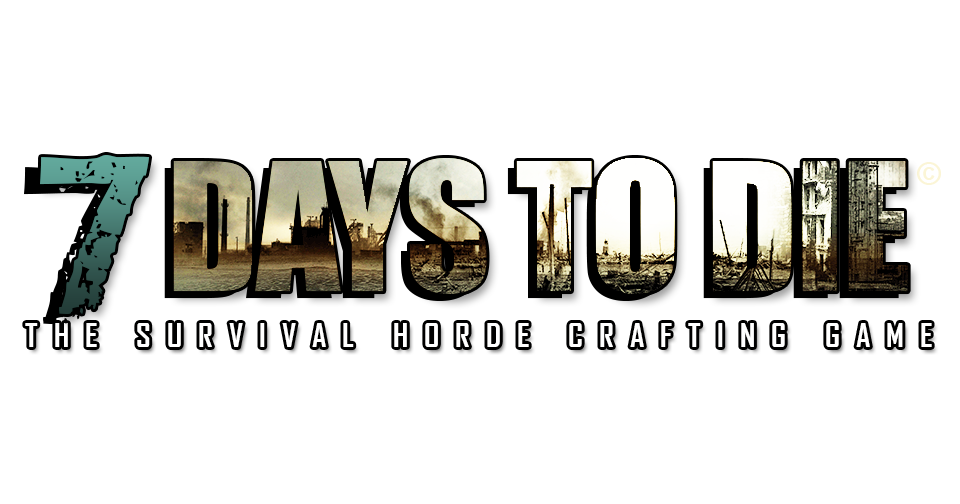 The game was Kickstarted last year (click here for the Kickstarted page), and they managed to get backers to pledge a cool half a million Dollars, and they only wanted $200k to make the game.

The game is currently version 8.8 Alpha (we started playing when it was 8.7), and it's already such a fun game! It does have a few bugs, but that is definitely to be expected from an Alpha build on Early Access.

Although you can play the game solo, I highly recommend to rather play with a friend coop. I've never been a fan of Zombie Survival games where other players are a bigger threat than the actual zombies. There are tons of servers online to join, but you can also host a game yourself, which is how my friend and I are playing at the moment. It did take some tinkering to get it to work properly, but once you have your settings and port forwarding stuff sorted, it's relatively smooth sailing after that.

You start the game in a random spot on the map, which looks like this: On you, you only have a very limited number of items, like a bottle of water, a bandage, some food and so on. The first order or business would be to get something to defend yourself with - you can punch things, but using a weapon is of course better. The first thing I always make is a crossbow (Daryl style!) - the materials you need is quite straightforward for that (some grass, which you turn into plant fibers, some sticks, and then for the bolts some more sticks, feathers and sharpened stones).

You will also get hungry and thirsty soon, so your second order of business will be to scavenge for some food and water. This comes in various forms, and you can even hunt some of the wildlife and cook their meat (you can even make bacon and eggs!)! Just be careful though, carrying the raw meat in your backpack smells, and that can attract zombies real quick...

After you got some food and water to help you survive your first night, it'll be a good idea to find somewhere to actually stay safely for the night - best bet here will be to find a house with either a basement or an attic (you'll have to clear the house of zombies first...), or even a place with a ladder so that you can get on the roof.

The thing is, when night comes, the zombies start running and they become a lot stronger. Not fun when a bunch of them are chasing you believe me! (don't worry, if this puts you off the game, you can always set your own game to have it so that zombies never run).

The zombies pretty much do what they're supposed to - stand around, chase deer, or if they hear or smell you they'll start going after you. If you outrun them, they'll eventually forget about you. You can distract them with sounds as well.

You can craft all kinds of things. You can literally build a house from scratch. Their is a detailed physics system, so you won't see blocks hanging in the air in this game like Minecraft. Zombies will also damage whatever is between you and them, and if they break part of your building's foundation, the whole thing might just come tumbling down.

Once a day (by default) a plane drops some supplies. This can be antibiotics or other medicine, crafting recipes, ammo, guns, building materials, etc. One thing I really hope for is that the devs get a better sound effect for when the plane fly over, it doesn't sound too good at the moment hehe. But that is a tiny thing that bothers me.

You can dig into the ground (use a shovel when it's dirt, and a pickax when you hit stone!). Your tools have durability, but you can make new ones or repair existing ones. You can even, once you've learned the right recipe, reload your own ammo. Firstly, you'll need a forge (stones and a pipe). You will also need bullet tips - for that you need a mold. To make the mold you need an existing bullet tip (get that from a regular bullet, simply take it apart) and some clay. Clay you get by digging in the ground. The mold you use at the forge with lead to make more bullet tips. Lead you get from scavenging the world for stuff like fishing sinkers, or car batteries. Next, bullet casings - this you can loot from objects in the world, usually trash, or you can make your own. Once again you need a mold, and your material here is brass (brass you get from breaking down things like trophies or door knobs). Lastly, gun powder - you can also get some in the world, or you can make your own. That's luckily easy - simply take a pickax and break down boulders you see. Sometimes they'll give you coal and potassium nitrate powder, which you combine to make the powder. Finally, at a blistering speed, you can combine your bullet tips, bullet casings and gun powder to make ammo.

You get all kinds of zombies/enemies. Fat ones (which soak a lot more damage, and usually drops spam for some reason), cheerleaders, naked zombies, nurse zombies (sometimes carrying medical stuff), zombie dogs, and even giant wasps (they drop honey, good for hydration and hunger!). Depending on where you are, like the snow biome for example, you get lumber jack zombies, and they're also tough as nails.

Another way to get a steady supply of food is to start a farm. You need a gardening hoe of course, and water (which you can bring with a bucket if you're not close). Then you need seeds (funny how you get potato seeds in the game hehe), which you can now plant. But be careful, the stupid zombies can trample your crops! Harvest regularly, and make some blueberry pie - good stuff!

I can carry forever about this cool game. My suggestion would be just get it and see for yourself. Just keep in mind it's still in alpha, and with that comes bugs (we've experienced a few believe me - nothing game breaking though...), and regular updates which will probably mean you'll lose your save game. Still, it's a great game, and the potential for a phenomenal game is definitely there. The next update for it, version 9, is due for 8 August according to the devs, and it's gonna be a big one! (check out their website)

Get it on Steam here

I've been on Steam since I got Half-Life 2 back in December 2004. At first, I hated Steam, like I'm sure many other people also did back then. But now, I get sad when a game I want isn't on Steam. As such, I have, over the last few years, purchased many a game on Steam, and here's my list as of 15 July 2014:


There you have it. I will play all of those games. No, that's probably a lie. I really want to, but I just know that time and the willpower will never allow it. A lot of the games I have tried so far, but most I haven't even installed yet.

Here is what I'm currently playing though:
I would like to do mini reviews of the games I like, so I'll link to those from this page as I do them :) Anyway, feel free to let me know in the comments what games you reckon I absolutely MUST add to my collection, and why (the games I really like playing are bold, that will give you an idea of what I like...)

In a previous post I bitched quite a bit about how Logitech products are failing me. And now, yet again another Logitech product I own has failed me. Shame on you Logitech!

This time around it's my Z506 5.1 Speakers. They just died without provocation. I read up and it seems this too is quite a common thing, it seems something vibrated loose inside. My father-in-law is good with such things, so he is checking to see if he can figure out what's wrong with them.

Come on Logitech, stop making stuff that breaks! Or is this normal for stuff that is out of warranty with you?
Posted by Rudi at 6:53 AM No comments: