I have finally made some more progress on Project Man Cave. The gaming PC I've been dreaming of building from scratch for years and year and years.

Two more parts to go, then I can assemble the machine.

Anyway, here's what I got:

After reading up on the Z390 chipset, and the various options out there, I decided on the Gigabyte Z390 GAMING X. This one https://www.gigabyte.com/Motherboard/Z390-GAMING-X-rev-10#kf

It cost me about R2800 here in SA. It's not the top of range by a long shot, but seeing as this PC will literally only be for gaming, it's more than sufficient for what I'll need.

As for storage, I've opted for the 500gig Western Digital SN750. Wow these things are tiny! I have plenty of storage in the house, so won't be getting dedicated storage for now, the NAS will serve that purpose just fine for the time being. Can't wait to see what this tiny SSD is capable of, until now I've only ever experienced regular old SSD's...

What remains are the RAM, and of course the CPU and graphics card. I currently game on a GTX970, so I'll be getting the RAM and CPU next and moving the 970 to this machine, until the next generation of nVidia cards get launched, which will probably be around mid 2020.

I had a look at some benchmarks, specifically to compare my current CPU, which is a 8 year old i7-2600, with the i7-9700k, and just the CPU upgrade alone will give me like a 50% frame rate increase at least! So I'm happy to keep on gaming on that graphics card until the next generation gets released. I'll probably be looking at the RTX3070 or equivalent.

The final, and extremely nice to have items, will be kitting the man cave out with an air conditioner (will get that done winter 2020, around July or so), a recliner type chair, and a big 55" 4k TV.

Anyway, Project Man Cave is definitely still a go, and, although it's a bit slower than I hoped for, the end result will just be all that much sweeter!

Cheers for now!
Posted by Rudi at 7:33 AM No comments:

I'm making progress on my Man Cave Project! To re-cap, I've always wanted to build a proper dedicated gaming rig from scratch, and kit out this room we have in the house next to our kitchen to be the official Man Cave. And I'm going all out (well, for me at least!).

I started in February to buy the parts I'll need for it. In my previous post, I mentioned the first few items: the Chassis, Power Supply, some case fans, and my awesome Steelseries Acrtis 7 Wireless headset.

Now, I have some more progress to share :D

At the end of April, I bought myself the Logitech Z607 5.1 Speakers, and I just couldn't let them sit in their box until I finally have everything, plus I wanted to make sure they work. They are great! The only hassle I had was it only included one cable to connect to my PC, which meant it wasn't 5.1 sound after all, so I bought a couple of extra RCA to 3.5mm cables and now it's connected properly. They sound great!

I already have a wireless headset, but for when I'm not gaming online I don't want to sit with a headset on while playing, so I decided to get some decent speakers as well. The rear speakers have nice long cables. Can't wait to move them to the man cave when it's done in the near future! 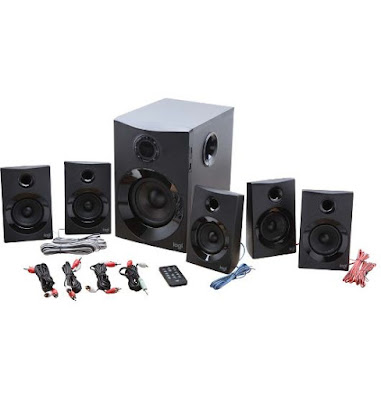 Next up, I got a nice wireless mouse, the Logitech G603. My awesome wife bought it for my birthday in June. I've been using it since, and it's great as well! It doesn't feel like a wireless mouse at all, it's very responsive and works great, plus, it has a bluetooth mode as well, so on days I feel the need to be quirky I use it on my phone haha! 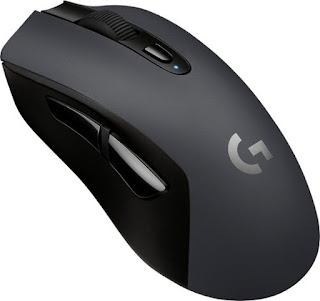 Last but not least, just last week Friday I went and picked up the Corsair K63 Wireless Keyboard with Lapboard. Remember, I plan to have a reclining chair in there, and a big ass TV to use as a screen :) so I need something I can game on such a chair with. My two options with the Roccat Lapboard and the Corsair option. From what I could tell, the Corsair is the better of the two, and boy oh boy, I can't wait to give it a proper go once the whole project is completed. This will also be my very first mechanical keyboard! 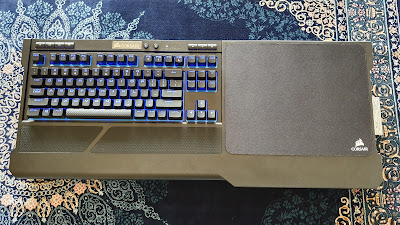 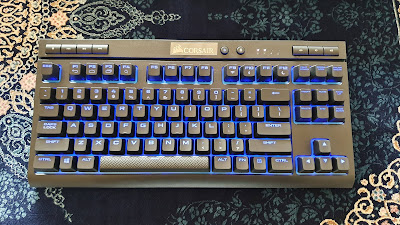 Project Man Cave is progressing very nicely. My next purchase will most probably be a 1TB M.2 SSD. It's either the WD Black or the Samsung EVO. After that, it will be finishing up the room itself, and then the last two purchases will be the TV (currently I'm looking at the Samsung NU8500 55 inch, but who knows if that will change closer to the end of the year...), and of course the Motherboard, CPU, RAM and Graphics Card.

Since forever, I just wanted to buy a brand new gaming PC. As in everything new. From scratch.

My wife is a graphic designer, and in roughly 2011 she bought a new PC to work on. At the time, it was pretty well spec'd. i7-2600 with 16GB RAM, SSD. Basically everything you would want at that time. It was her work PC for 3 years. Then, in October 2014, our son was born. We both work from home, and we thought (not sure why haha), that for her to get a Laptop as her main PC would be great, then she can sit with the baby and work and things like that.

So, she bought a MSI mid-range gaming laptop (i7, 16GIG RAM, SSD, GTX760m), and her old PC became my dedicated gaming PC.

We have this room next to our kitchen, which is a glorified walk in pantry/storage room. I put a table in there, took a network cable through the ceiling and turned it into my man cave. I put a GTX970 into that PC, and it became dedicated just for gaming. It was awesome!

Meanwhile, my normal work PC was in our main study and was doing it's thing fine. It was an i5-650 with 12GB of RAM. For web design and general scripting it was perfect. Until the motherboard gave in. This was about 2 years ago (mid 2017).

So, finances didn't allow to replace it, so the gaming PC became the work/gaming PC. And it moved out of the man cave to the study. A sad day indeed.

Meanwhile, web designing sucks more and more, so I give much more time and energy to my Herbalife business. It's amazing what can happen if you put some serious focus into something. I've since closed my web design business, and I'm now doing Herbalife full time. I'm never behind on bills anymore, and I'm actually doing well enough that I can start buying a luxury item here and there. And the business is just growing, so I'm super excited about that and what the future holds.

So yes, I've been forever yearning to build a brand new PC from scratch specifically for my man cave. But not just that, I want to kit out that man cave to be super nice and a dedicated spot just for me to go relax in.

Now that business is going so well, I've actually started with it! I have decided to do something for it every month as time goes on, and I started with the PC case, PSU, some case fans and a wireless headset last month.

I watched numerous videos online and I wanted something really stylish and smart looking, with RGB because why not haha! And this video grabbed my attention:

It cost me R999 when I bought it, although I see the price has gone up slightly now.

I also added two of these 120mm case fans, also by Phanteks: https://www.wootware.co.za/phanteks-ph-f140sp-bbk-black-1200rpm-140mm-high-airflow-low-noise-case-fan.html

Then, seeing as I was buying from Wootware, I checked out what PSU's they have, and I was looking for a well rated one that was fully modular, so I ended up buying this Super Flower 650W 80 Plus Gold PSU: https://www.wootware.co.za/super-flower-sf-650f14eg-bk-leadex-ii-650w-80-plus-gold-certified-fully-modular-desktop-power-supply.html

Here are the pics for them: 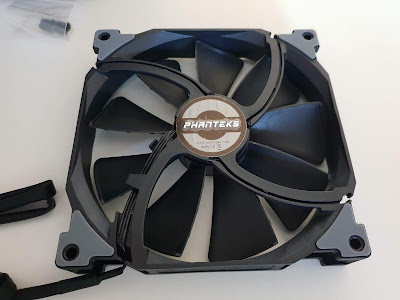 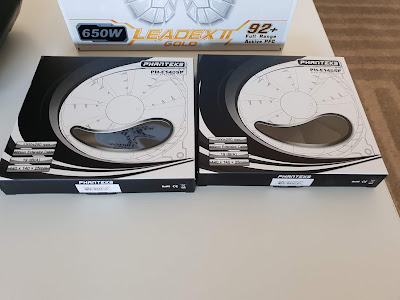 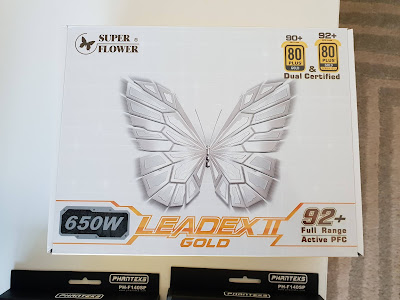 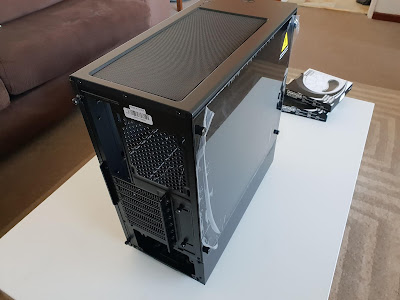 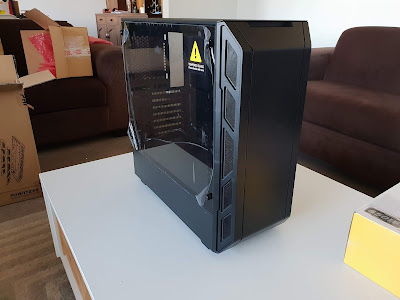 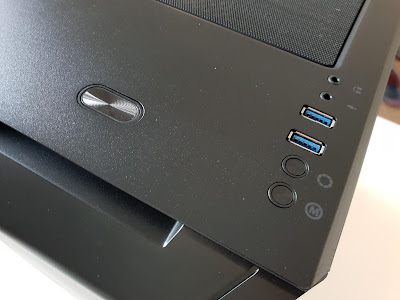 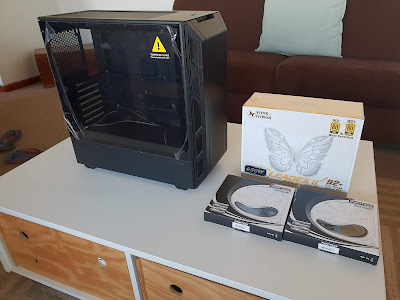 That was what will be my purchase for February for the man cave. The plan was to buy the headset now in March, so I checked out all the videos about the contenders out there. I saw the HyperX Cloud Flight, the Corsair HS70 and the Steelseries Arctis 7.

I have had a Steelseries Siberia V2 for 6 years. And it IS AWESOME! But, it is beginning to show wear and tear, the earpieces are giving off little black flecks and so on. It still works and is beyond comfortable, so I was leaning towards the Steelseries as I had such an awesome experience with that set.

And, out of the blue, as if Takealot read my mind, they had said headset on special for R2000 instead of R2500. I had some ebucks saved up, so I took the plunge and bought it as well, and I am extremely happy with it! Still super comfy, and sounds great, and it's, of course, WIRELESS!! whoohoooo!!!!

Here are the pics: 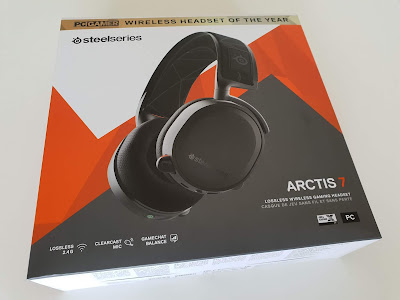 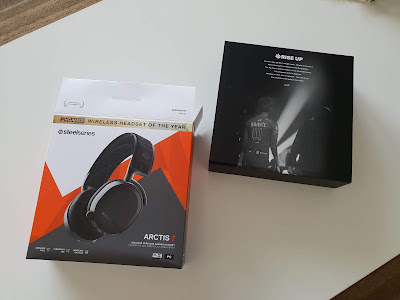 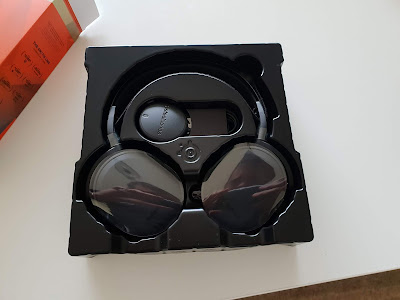 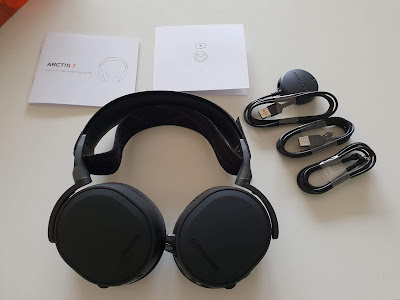 So, Project Man Cave started with a bang! First month, I ticked off three items on the list already! This is gonna be beyond fun!

The rest of the stuff

So yes, obviously I want to go all out, so here's what's on the list still:


Then, this is for the room itself:
So yeah, I'm dreaming big for this, and the best part is, I've already started!