Overwatch ranked play - how I feel about it

At first, I had no interest in playing Overwatch ranked games, but my one friend told me he found it to be a much better experience than Quickplays. The thing is, people playing ranked generally try to do a better job at things and actually do their part in the games. According to my friend at least...

The first season ends tomorrow, so I decided last week that I'll do the placement matches and get some ranked play in as well.

Boy oh boy, I HATED the placements matches. I won only 3 out of the 10. The ones I won was great fun, but the ones we lost was just plain terrible. I somehow always gets placed against a far superior team, with toxic players in our team.

Now, I don't mind if you have a shitty game or make a mistake, but to blatantly join the game just to disrupt it for your team? Last night, with my 3rd last placement match, we had a Mei on our team - as we were all running for the point, she all of a sudden put up an ice wall blocking us all for a few seconds. When we finally reached the point, the whole enemy team was already there ready to wreak havoc on us. And boy did they. Another thing that bothers me is when someone chooses a hero they can't play. Or the wrong hero for the map. I mean, if you're gonna pick Widowmaker, and you end up with little to no kills, then switch to something else damnit!

Well, I wanted the sprays and stuff you get for taking part in competitive play, so I pushed through, but didn't have a good time doing it. BUT, everything changed when I finally finished up with the 10 placement matches (I ended up being rank 41 hehe), and played a proper competitive match. It was much better! So much better!! I had an absolute blast. We were grouped with nice players, and even though we lost about half our matches, it was still way better than anything Quickplay we've done before. The guys we played with actually tried bringing their part, which makes such a big difference, even if they make mistakes and stuff. We had a leaver or two, but at this level that is to be expected.

Anyway, we're definitely going to play much more competitive games next season, it's just a much nicer experience than Quickplay. Quickplays have their place though, where else are you going to learn how to play the new heroes and refine your skills?

It's almost high noon here, and I sense death is about to rain from above, so until next time!
Posted by Rudi at 3:00 AM No comments:

Email ThisBlogThis!Share to TwitterShare to FacebookShare to Pinterest
Labels: overwatch

My friend showed me this clip of some hilariously funny Overwatch moments. I just had to share it! Enjoy!

We had a great time playing Overwatch last night, I even managed to kill someone! :P Really helps if you've got a friend or two with you in the game! Thanks Alister and Papa for joining in on the mayhem!

Check Papa's channel too here: https://www.youtube.com/channel/UCN0W9aEF3NITUoO9gwlX7ew
Posted by Rudi at 1:30 AM No comments:

When my son was born, it happened so much that I had to sit with him while he slept. He's been a bad sleeper since pretty much day one.

All those hours of sitting got me to scour Youtube for things to watch on my phone while he's sleeping on my lap. Here are some awesome channels that I'm subscribed to, and can highly recommend:

Unit Lost - with the whole Overwatch craze taking over the internet, this guy (his nickname is Stylosa) makes some really awesome Overwatch related videos. Mostly they are tutorial type videos, and I've found them a huge help. Plus he plays really well, my jaw always drops to the floor on how well these guys play!

SciShow and SciShow Space - I don't know quite how I stumbled upon these guys' channel, but I'm so glad I did. I love learning new things, and their regular videos are great at doing just that! If you find our world and how it works interesting, then you will love these two channels!

Numberphile - Sadly, I didn't do so well with maths at school, but I still find it very interesting. These guys talk about all things number related - for example, did you know that a rubik's cube can always be solveds with a minimum of 17 moves?

quill18creates - I've been making games for a while now, and Quill18's videos are awesome! I just love his way of doing Unity tutorials, and I like how he makes mistakes and doesn't edit it out, because that's how coding is in real life. Just yesterday I watched one of his videos on how to do a simple TD game. Highly recommend!

LinusTechTips and Techquickie - I recently started watching these guys' videos. They're from Canada and they get to play around with the most awesome computer related goodies! For example, ever thought of submerging your whole PC in mineral oil? Ever wondered what a 100TB NAS would look like? How about putting your dead graphics card in an oven to make it come back to life? Yes they have it all!

Vsauce - Vsauce, Michael here. That's how they all start. Hard to explain, just do yourself a favour and check it out. He talks about some really interesting topics.

That's it for now - just don't blame me if you never get any work done ever again ok.

Uh, hi :) I haven't posted on this blog for quite a few months! This year started with a bang and it's been quite a ride. One of the reasons for me not blogging as much is just being so damn tired haha! You see, we have this awesome little guy we lovingly call our son. He's turning 2 in October. He doesn't like sleeping. I can literally count on my two hands the times he's slept through in his life. And it's not as if he's crying or unhappy, he's just not that fond of sleeping we've come to realise. I think he's a prodigy of sorts, because only a busy mind keeps one up to such an extent!

Anyway, the last post I made was me celebrating the fact that our game, Catch a Falling Star, got Greenlit after being in the system for over 6 months. At one stage I thought it would never happen, but thanks to Dan from Back To Basics Gaming, our publisher, and some clever marketing from his side, it finally got through. It went on sale shortly after that, and it's actually doing quite well in terms of ratings/reviews - so far over 85% of Steam users have given it a "recommended" - so I'm very happy about that.

As far as gaming is concerned, sadly I don't get to play more than once or twice a week at most. I've dedicated a few nights a week to focus on some more game development with my good friend Jayson - oh and that reminds me, check out our awesome new logo for Alister Software: 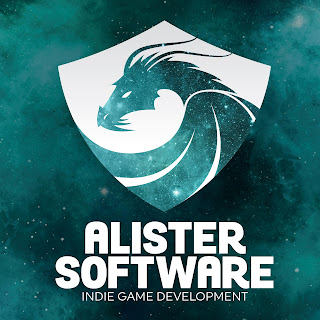 My SUPER TALENTED wife, Natalie (check out her site for some awesome graphic design stuff) made it for us, it really spruced up the image of our small game dev company I think :)

But, getting back to the gaming, I've only been playing Fallout 4, Overwatch and now, since it's been release FINALLY, Starbound. Just loving these three at the moment! Check out this short clip of me saving keeping my Reinhardt alive in Overwatch:


Sadly, I don't play it nearly as much as I want. I'm only level 26 at the time of writing this, but I really want to play much more! Just loving how polished and fluid the game is. That's so typical of Blizzard, they really blow any competition out of the water when they make games!

Oh, and I also pre-ordered No Man's Sky. I'm cautiously optimistic about that one. I say cautiously, because I've found that huge procedural based games like that usually look great on paper, but in the end they lack in some area or another. Can't wait to try it though and see for myself, hopefully I'm pleasantly surprised this time around...

Well, here's to hoping I get to blog some more in the near future!

Till next time (which hopefully isn't months from now!)
Posted by Rudi at 4:29 AM No comments: