Yes, this post is about Terraria again. I just cannot seem to get enough of this game lately. I think it's mostly because I'm playing with my good good friend Jayson the whole time (follow him on Twitter) - we actually spent the whole day yesterday playing.

This post might contain some spoilers, so don't read on if you want to experience everything yourself first.

(this gap is deliberate...)


We both started new characters, and rolled a new medium sized world. Our thoughts so far? Damn that is one huge update, and a great one at that!

We first did some exploring to both sides, and we discovered our world was rolled to have Tin instead of copper ore, and that we have the snow biome. We built a small shelter to get started with, but soon decided how we want to build our main dwelling, and ended up with this (work in progress as you can see): 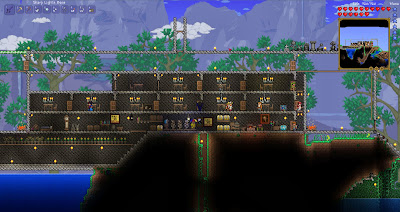 Click on the image above to see the bigger picture.

So far, it's been a blast, really enjoying the changes! My favourite change so far is the ability to run up 1 block high steps, usually you had to jump continuously while running just to keep your momentum up, but this time around it's a breeze to actually go places.

We're already housing two new NPC's, the Painter guy, and the Dye guy. As you can see to the top left, I have some snow bricks that I painted green, and my cactus armor is blue and black.

A huge number of decorative changes have been made, as you can see we have various types of chests that you can get throughout the world, some paintings for our wall, a funky cactus workbench (just because we can), and the light sources have really been spruced up, they look stunning - also, you can put torches on the background wall now, which is really great.

Another cool feature is you can put bars or metal down on the ground and stack them, so our "basement" room will be our treasure room once we have a surplus of bars.

We already defeated the Goblin army, as well as the Eye of Cthulu, and we're about to break our third shadow orb (yes, our world didn't have the crimson biome).

The snow biome is lots of fun, been meeting all kinds of new enemies, and finding some really cool items (like a snowball launcher, or blizzard in a bottle!).

We've also been at the jungle, but haven't explored too much yet, but the underground jungle trees are really cool looking! Which reminds me, you now have many more kinds of wood to make furniture and all kinds of stuff with.

Gems can also be placed on the floor or on walls, plus you can make grappling hooks with gems too now.

Lastly, ROPES! This really makes getting around a breeze, and they're quite easy to come by in all kinds of containers and stuff.

Lastly, that thing next to our grandfather clock - that's called the Extranitator - finally there's a use for silt and slush blocks! You can extract all kinds of ore from silt and slush, and even gems! We were very lucky to have found one so early in our game (we also both got magic mirrors!), now it's just a case of getting huge amounts of silt and slush, and we should be a-for-away for pre-hardmode armors and stuff.

Our thoughts so far? Damn this is one big update, and an awesome one at that! Looking forward to go check out the dungeon!

Here's a list of some more items that I found that are new: