It has been a while since I last posted something on this blog, but I have good reason! My son was born on 3 October, and boy oh boy, what a ride it's been! He is also, in part, the reason I started playing Spellfall. On one of the many nights where I was awake at two just after changing so my wife can feed him, I checked out the Google Play store, and discovered this little gem of a game... Firstly, it is a free-to-play game, but there are real money that you can spend on items and coins, which is the in-game currency.

Personally, I really do not like the whole free-to-play kind of games. Especially when the company charges absolutely ludicrous amounts for an in game item. In the case of Spellfall, there are these fancy weapons you can buy with real money, and they go for around $80-$130! I mean, who in their right mind would ever spend that on an in-game item! There are also things like recharging your health quicker for a dollar, or buying some additional coins to help you buy that nice new rune or armor.

Anyway, it's of course optional if you want to fork out real money for the game or not. I have now played the game for exactly 30 days. I have lots of free "snippets" of time to quickly play a game of Spellfall, and I've actually been able to log in every day. The nice perk about doing that is after 20 days, you get to choose one of the $80 weapons to be added to your arsenal! Miss one day though, and you start all over again...

Another nice feature of the game is you can have 3 different games, or save slots, at a time. That means it's not like other games where if you're dead, you HAVE to wait for your health to recharge before playing some more, chances are very good that one of your other saves will have a fully charged and battle-ready mage with which you can play. 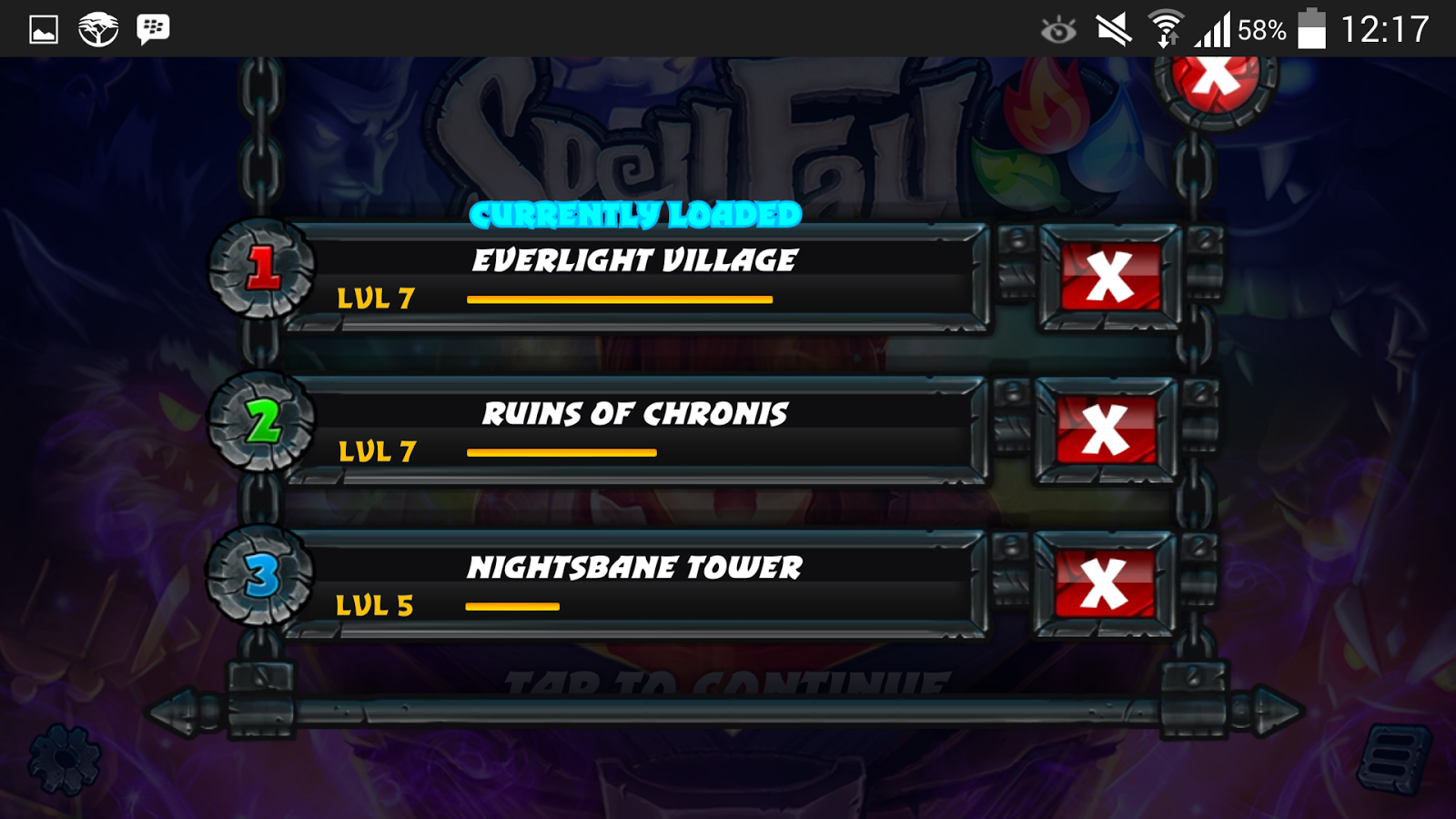 So, more about the game. There is some or other story behind the thing, but I didn't bother to actually read up on it, I was just looking for something to keep me occupied while my boy has his midnight snack and I have to burp him afterwards... Basically, you're a wizard, and you battle these monsters. You have a set amount of turns, in which you can move around tiles on the board to make matches. The tiles available are Gold, Frost, Water, Fire, Poison and Lightning. It's a typical match-3 game, but instead of just being able to swap adjacent tiles, you can move any tile to anywhere on the board - a nice refreshing touch to the genre if you ask me - plus you can set up some crazy combos for massive damage! Once you run out of turns, the enemy attacks you, after which your turn counter resets, and you can go again if you survived the onslaught.

There are two kinds of equipment your wizard can use - armor and a weapon. Each of these have a specific number of slots, into which you can place various runes. I really like the whole runes feature of the game, makes it something different! 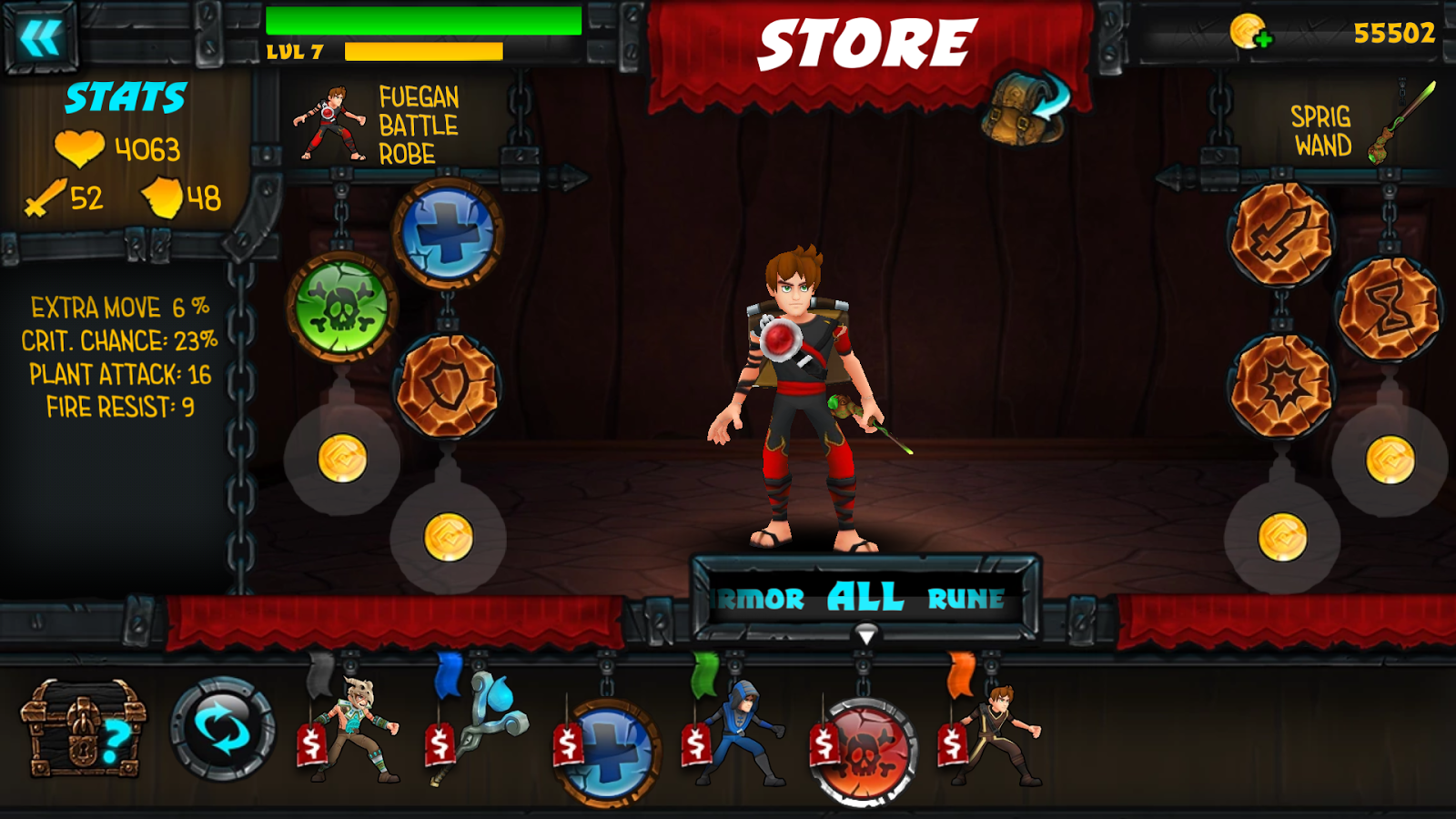 You get two kinds of runes, active and passive. Active runes, like Heal and Poison, for example, charges as you match tiles of the rune's colour. The Heal rune charges when you match water tiles, Poison rune when you match poison tiles. While battling the enemy, only one rune can be active for that specific turn, but you can switch freely between them as the battle progresses. This is something to keep an eye on, because sometimes you make a huge combo of a specific colour, and then the rune wasn't equipped and your awesome move didn't charge it. 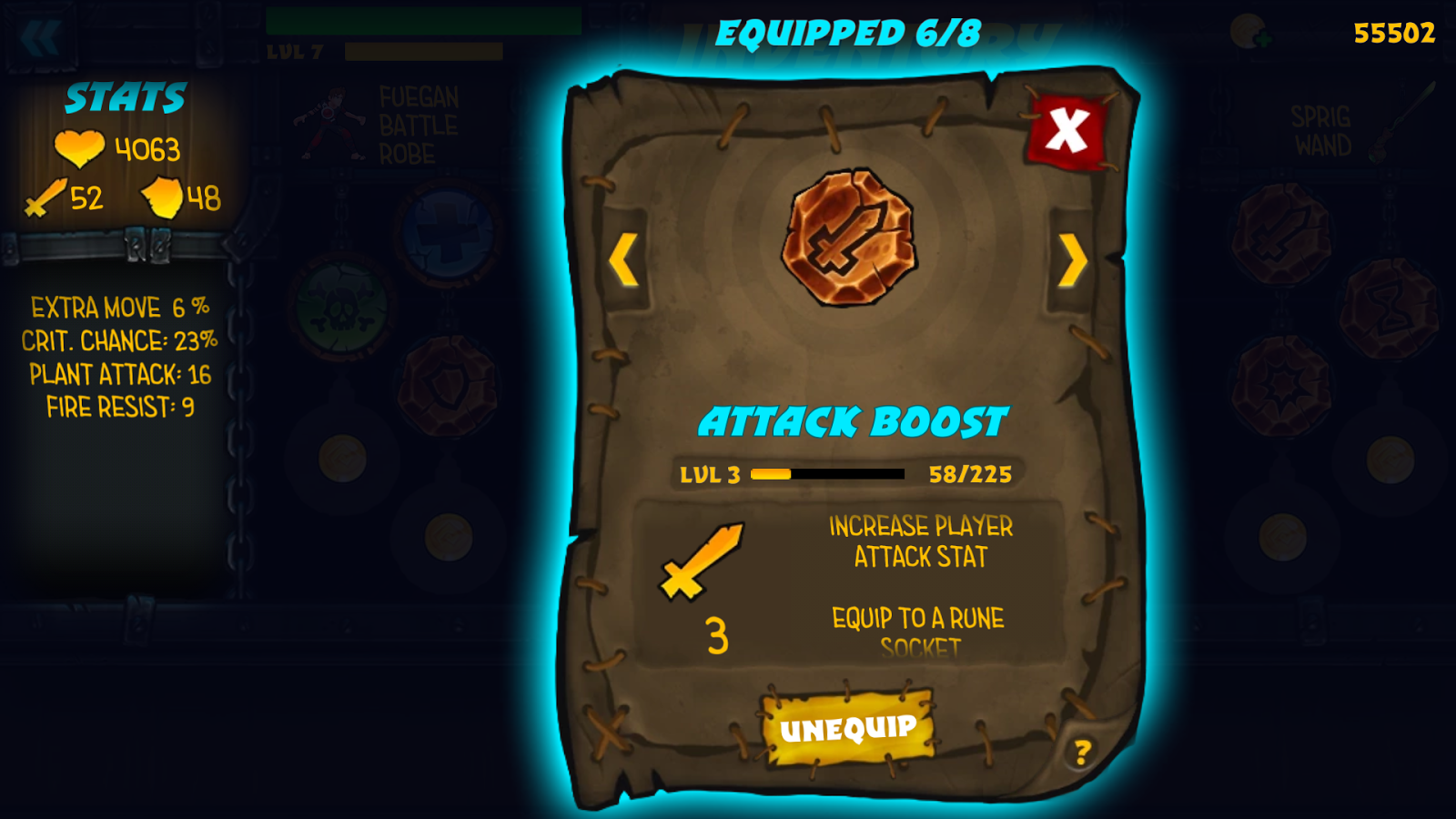 Passive runes function in the background, and gives you, for example, boosts to your damage, or allows you to drain some health from the enemy and heal yourself.

Runes also levels up, but extremely slowly. After a battle, you earn rune points, which helps your runes level up. The Active runes have 3 levels, and as far as I can tell, for passive runes it varies...

When you equip a new weapon or armor, not all of the rune slots are available from the start, so you have to purchase those slots with coins. Sometimes that can be quite a pricey story, and each slot on the item becomes progressively more expensive...

The game world is divided up in several areas, and your goal is to conquer each one. Don't worry, I've been playing for a month now, and I've only conquered the first 4 areas. It takes a while to go through them, because after each battle you need to wait for a good 30 minutes for your character's health the replenish, but also, this is not a game where I sit and play for hours on end. It's a perfect time waster for me, and that's great! 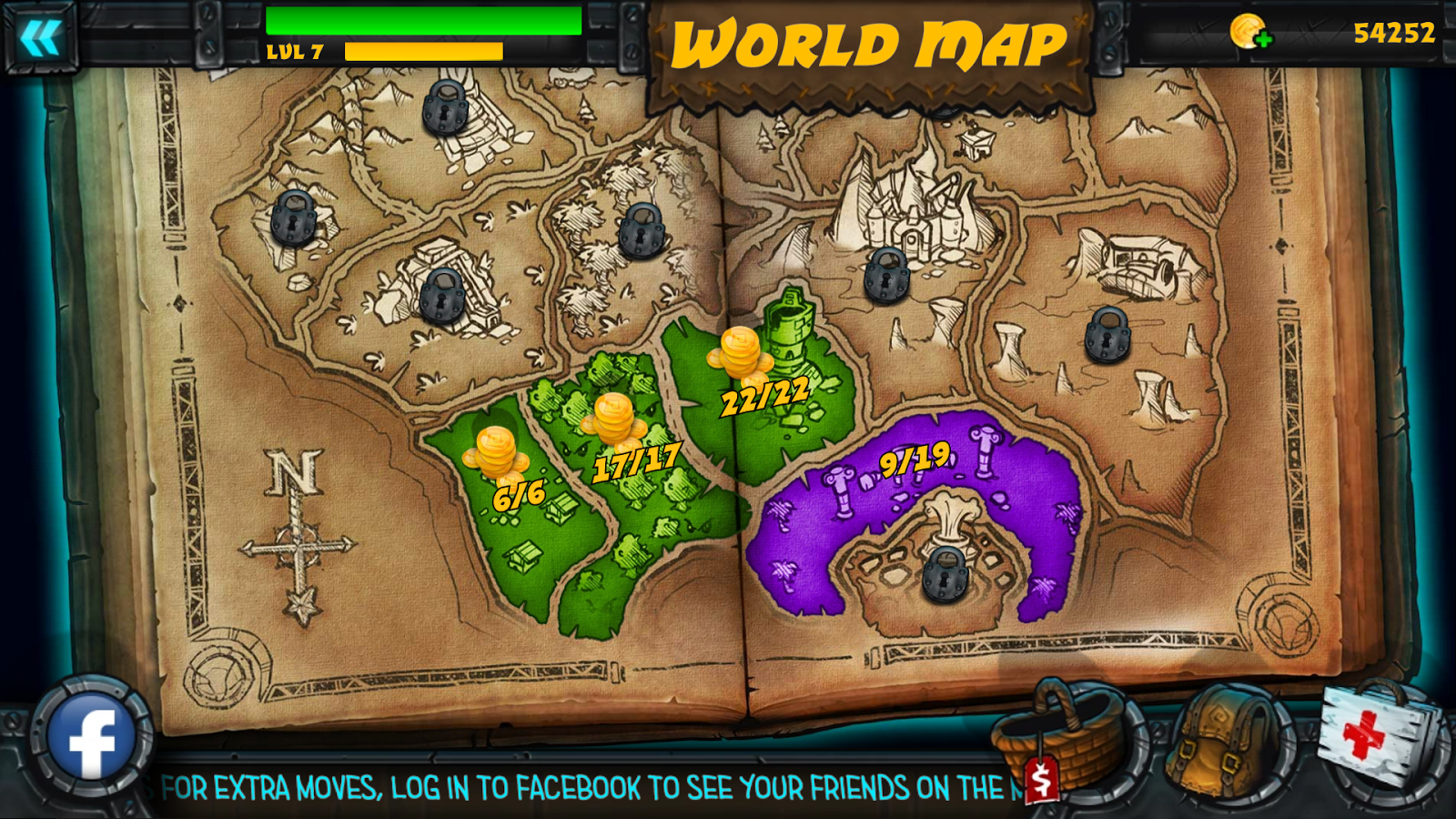 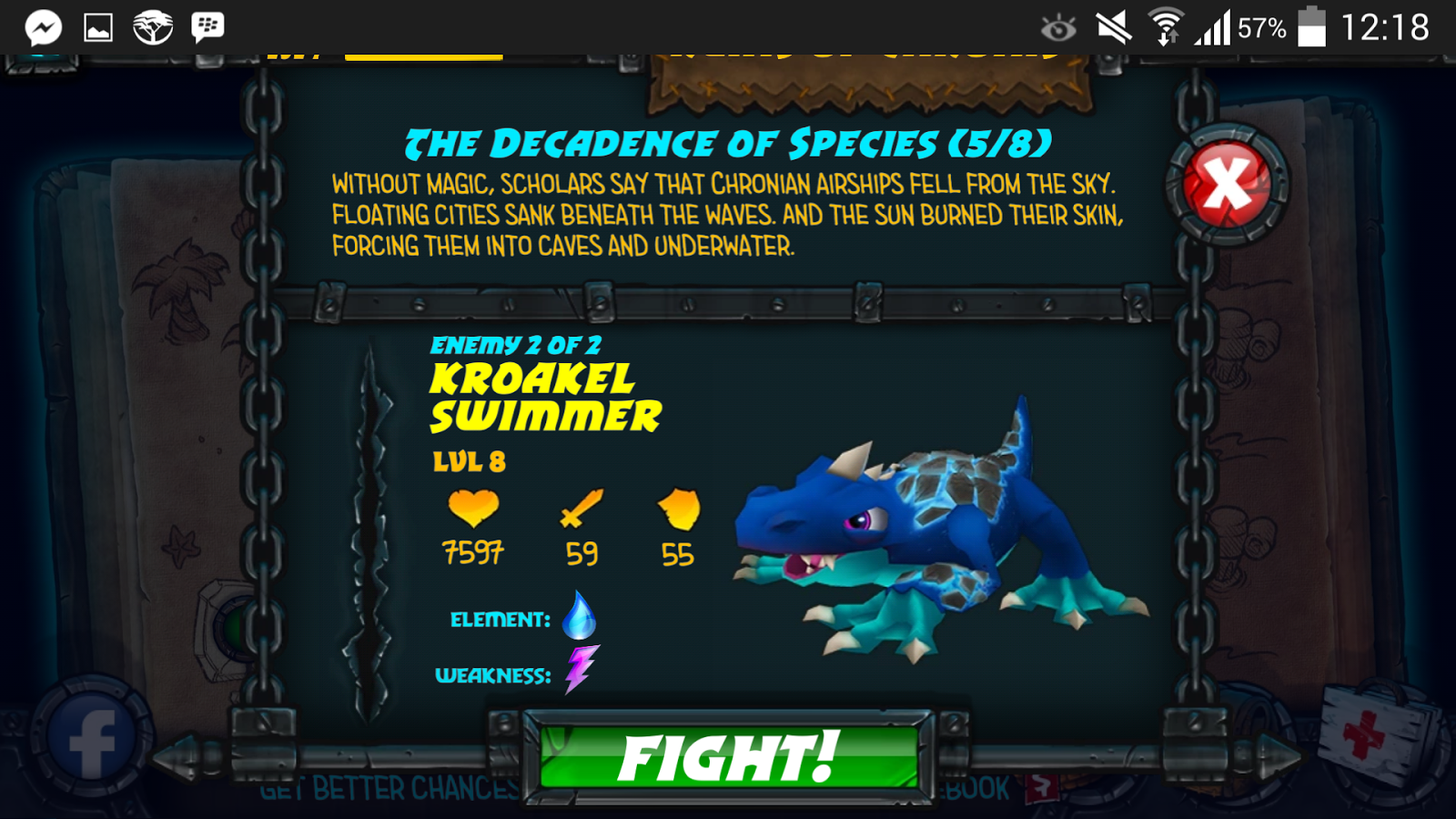 A nice thing about conquering an area on the map is you can then start earning coins off that area. So every time you log in, you get a quick bunch of coins, which can really help with your upcoming battles!

After conquering the 3rd area, it becomes possible for enemies to slowly start taking over your previously conquered areas again, one stage at a time. For me this keeps it rather interesting.

Getting back to the various items you can get, you have two inventory slots - armor and a weapon. These can have special abilities as well, like a boost in your critical chance, or additional protection against a certain element, or even a chance to score an additional move while playing. Most items have around 5 rune sockets, so you can equip the ruins you've purchased in those sockets, but you need to purchase the slots first like I mentioned earlier... 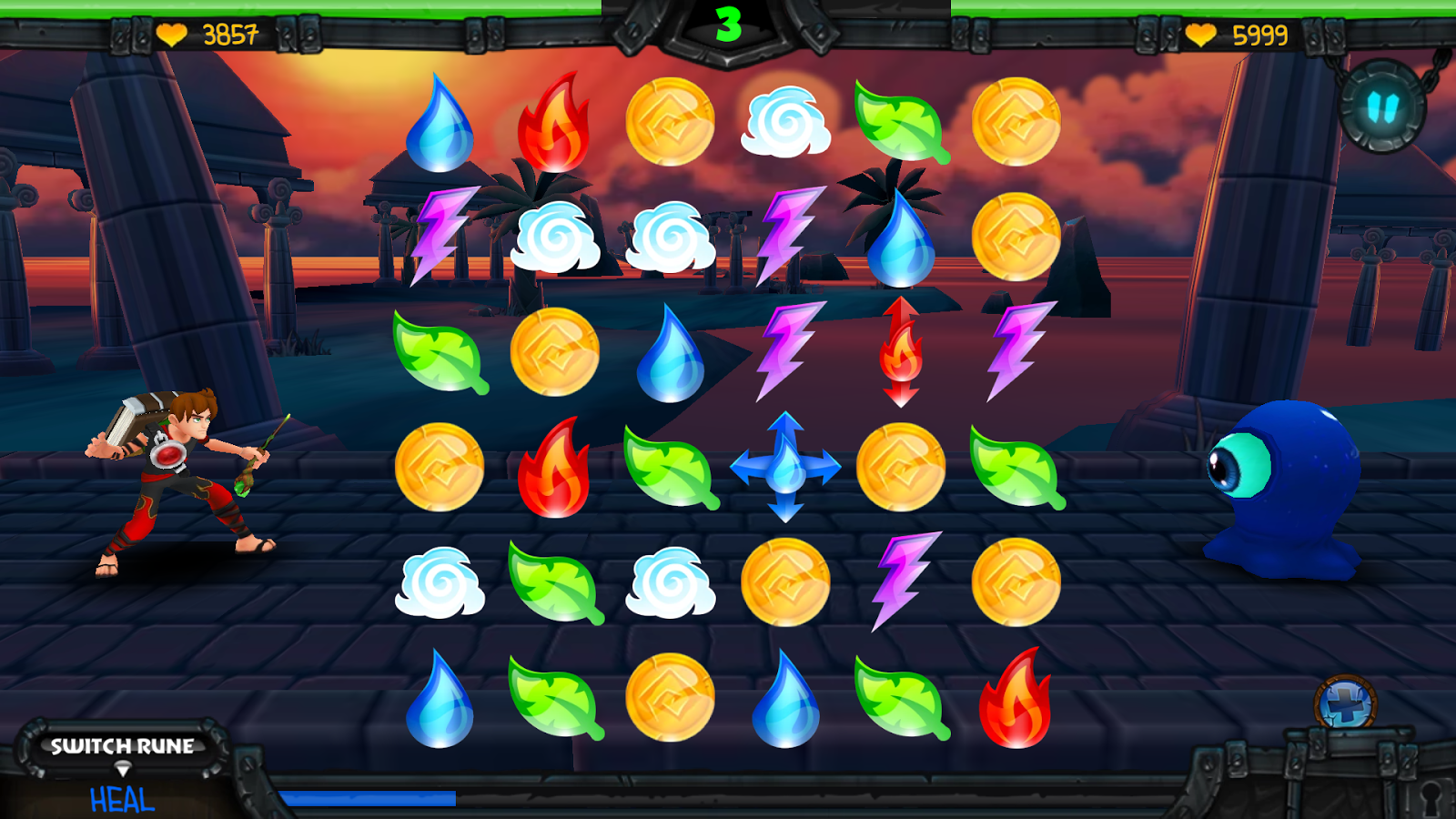 Anyway, this is my top time waster at the moment (Blocky Road is a close second!). I haven't spent a single cent on the game, and that's how I like it. And I still feel it's unethical to charge such ludicrous amounts for in-game items. Rather charge $3-$5 for the game, and allow you to earn those items in a reasonable way. But, I guess the whole "make the game addictive so people cannot resits spending money for more lives/turns" is a business model that works (sadly) - it's just not one I'm in the least fond of.

Get it for FREE on Android here - I can heartily recommend it, and if I were to assign a score to it, I'd give it a solid 4 out of 5! Reviewed on my Samsung Galaxy Note 3
Posted by Rudi at 11:54 PM No comments: