The last few years a lot of Indie developers have started popping up all over the place. The most popular one is probably Minecraft, which spawned a wave of other developers all trying to get their piece of the pie.

I have huge respect for each and every indie developer, and I try my best to support them as far as I can! One of the best investments of $10 I've made in the last two years is buying Terraria: 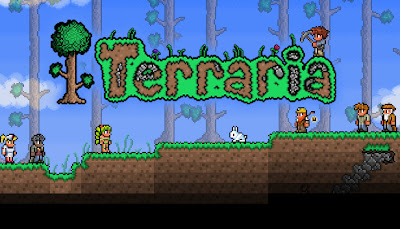 It has come a very long way since being first released. One thing that did count in Terraria's favour is Notch tweeted to his millions of followers to check it out, resulting in 200000 sales in the first 2 weeks if I remember right.

It's similar to Minecraft in that you mine blocks and can build all kinds of things with those block - main difference though is that this is a 2D platformer, whereas you know Minecraft is a 3D game...

My wife is always surprised that I like this game so much, she just can't understand the appeal. My best explanation for that appeal is that while playing the game, you just kind of zone out. 3 hours feels like 5 minutes.

It's a perfect example of what a platform game should be, giving you free reign on what you want to do. Be that building a huge giant castle with all kinds of elaborate decorations, visiting the dungeon to rescue the goblin engineer, or taking on the many bosses throughout the game, each with their own ways of defeating them.

In Steam I've clocked in just over 150 hours of gameplay in Terraria. That's a about $0.07 per hour for entertainment - in anyone's book that is money well spent!

The other fun part - you can go at it Multiplayer! My buddy and I have just recently started a brand new world with brand new characters, and we play it over the internet together. Awesomeness!